Well, as always our weekend was busy. Saturday, I spent the entire day in the kitchen, literally.  Making low-iodine soup for the time period after my surgery and before radiation.  We used 5 different recipes and made, I think it was, about 60 servings total.  Everything was organic nonprocessed, lots of cutting and slicing.  Even had to make gallons of homemade chicken broth.

Hubby’s mom went last week to the beach and bought 300lbs (yes that was not a typo 300 lbs) of shrimp!  She gave us a couple pounds of the shrimp and on Saturday night hubby fixed me sinfully delicious sautéed shrimp.  Oh was it good and oh how I will miss seafood during my low-iodine diet.  Loaded up on butter too!  I had enough calories, cholesterol, and fat for a year…but it was worth it. 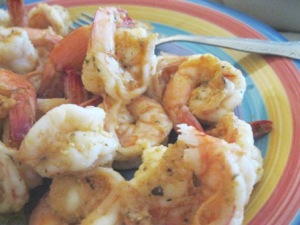 While youngest took a nap on Sunday, I cut daughter’s hair.  It was looking like a hot mess and we were starting to have crying fits in the mornings with all the knots.  I think she was a little scared of mommy cutting her hair (both of us), but we made it through and I think her hair turned out rather well, if I do say so myself.  She was tired of me fussing with her and wouldn’t let me near her with a hairdryer, so she ended up going to church choir with a wet head. I tried for 10 minutes to get youngest to smile for the camera, but he wanted no part in this activity.  He started putting his finger up his nose, as if he knew that would make me stop. Ha! 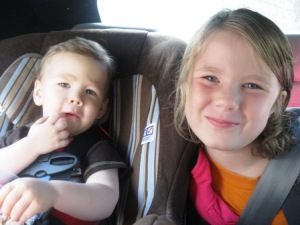 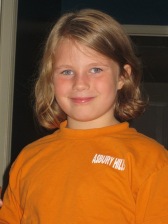 Sunday night, I asked my eldest to get her brother some apple jacks.  I should have inspected the bowl before she gave it to him.  Just a few minutes later, he was covered with sugar.  She had given him the bottom of the box.  I think he enjoyed himself. 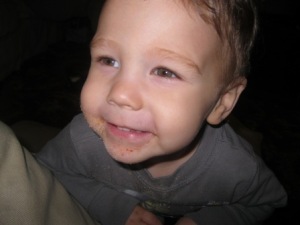