Needless to say we have been super busy.  I thought summer was a time for relaxing and sun?  The kids have been going non stop for the past couple months.

H spent an entire week at my parents and had an absolute blast.  He helped feed goats, ducks, and the chickens.  Spent tons of time in the swimming pool and now has a new pet rock, that he has carried everywhere with him since he got home.  He gave my grandfather a building block lesson and literally ruled the roost. 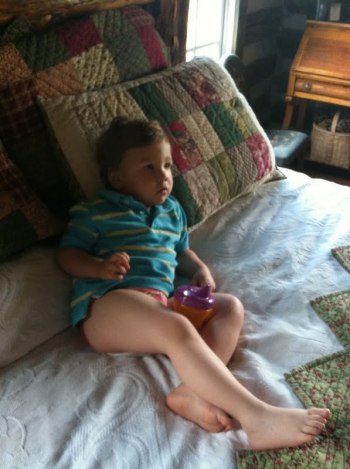 Doesn’t look he missed me at all does it?

T, while H was at the grandparents, spent a week at church camp.  She started out on the top bunk, but some time during the week she switched.  It was too hot she said (even though the cabins had air).  Yeah, air!  Far from how it was when I went to camp.  I was very proud of her.  She did all activities and had a blast.  She conquered her anxiety of the 10 foot side of the swimming pool this year and took the test and passed.  She wore the wrist band for a week after she got home.  She climbed a tree and also did a zip line.  Even let the counselors tip her canoe, after she said she wasn’t going to because of snakes.   They slept out one night in a tree house and she was in charge of gathering firewood.  She came home with lots of chigger bites, but she said it was totally worth it. 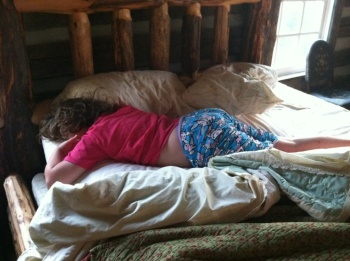 First day after camp at my parents….not tired at all.

I can’t believe we only have a few more weeks of summer left and then school starts.  4th grade and 3k here we come!